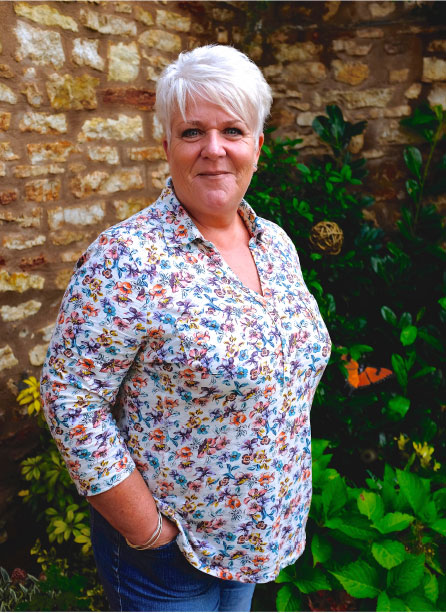 Tracey, 58, cares for her husband Paul who was diagnosed with early-onset Alzheimer’s four years ago. She’s now fundraising for a 10KM run to raise money
for the Carers’ Centre.

“Last summer, I had a bit of a wobble. Everything with Paul’s diagnosis just hit me – I hated the word Alzheimer’s, dementia, I just didn’t want to hear it. I felt sad with the whole situation, angry, cheated, I felt like this shouldn’t be happening to us.“

I met with a friend who asked me if I was alright and I just broke down and said ‘no, I’m not.’ My friend suggested I call the Carers’ Centre – I have been registered as a carer
for a while, but never needed to use the service. I just hadn’t thought of it.

“I called the centre and spoke to Carers’ Support Officer Lorraine. She was just lovely and so supportive. We talked about how I’d lost my dad earlier in the year and then had my mum staying with us for a couple of months. I’d kept myself so busy, that I hadn’t really grieved for my dad. I was also grieving for Paul too because even though he’s still
here, he’s changing.

“I had a few sessions with Lorraine and she said she thought I might benefit from taking part in the Coping with Caring course, which was just great. “

“For the first two sessions we didn’t talk about the person we cared for. I didn’t know who the others looked after, which was good in a way as we were just ourselves and focused on ourselves. I wasn’t talking about Paul and what he could and couldn’t do. We didn’t get around to talking about who we cared for until the third session.

“Ruth, the course leader, asked us to change our way of thinking and try to really understand the other person. I knew I was getting frustrated at home and not reacting well to things. Now instead of being cross with Paul if he gets things wrong or misunderstands, I just distance myself from the situation. I go out of the room or count to 10. I also heard from other carers who are facing what I feel to be much more difficult situations than me. That gave me a perspective I’d not thought about before.”

DECIDING TO RUN THE BRISTOL 10K (MAY 5th)

“I started running last year – at 58! I was inspired when I watched my daughter Becky run a half marathon – she did so well and it was amazing to watch. I wanted to feel that feeling for myself. I wanted to do something I’d never done before.

Becky and I run the Park Run (5km) every Saturday and joined a running club. I started in the beginners group where you learn to run 5km and now I’m in the senior group doing longer runs, but still quite slowly!

“All you need is your trainers and I find running really allows you to get in your own headspace. On Saturdays Becky & I do the run and then have coffee and cake and I’m just buzzing! I feel better in myself and have lost weight.

“I’ve done charity events before and now I want to support the Carers’ Centre, after all your help this last year. I hope to raise £500 for the centre.”

“Something I really appreciated was that Lorraine said any time I wanted to give her a ring to chat, I could do that. Her advice was to not let myself get to the stage I did last summer – to go and have a chat and a cuppa with her when I start to feel down rather than trying to cope by myself.

“I recommend the Centre to other carers – for me there was no better support than you guys. I just needed to talk through things which I was able to do with the Carers’ Centre.”

Support Tracey’s fundraising for the Carers’ Centre at her Just Giving Page. The 10K takes place on May 5th, 2019.

There are many ways you can help us to support carers like those you’ve seen on this site. From following us on Facebook to raising funds to donating your time – please join us in creating a community where carers can stay well, stay connected and stay in control.

Find out more about our work

Make a difference, get in touch

“Through supporting the Carers’ Centre, I’ve been able to appreciate things I don’t currently have to face that carers do. I’ve also learnt a lot more about young carers. I had no idea some carers are so young, sometimes 4, 5, 6 years old, taking on carer roles and that’s kind of amazing to me.”